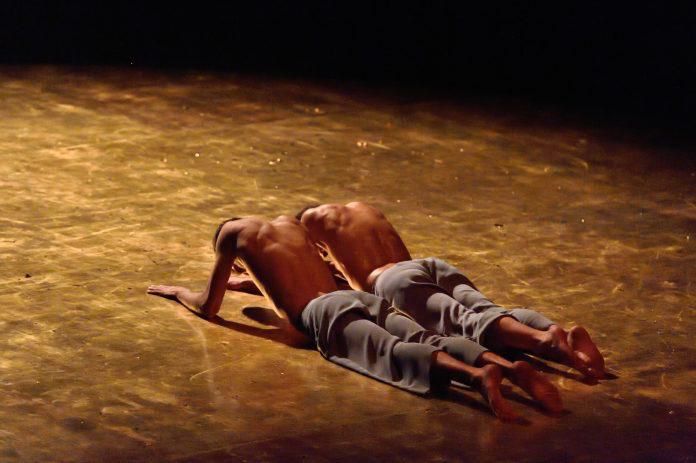 LE TUE LABBRA (YOUR LIPS) / ON THE SONG OF THE SONGS

Unique among the books of the Bible, the Song of Songs brings a voice that is ever-new and that still reverberates with us today.

Shimmering words, filled with adoration, immersive and engulfing; as are the gestures that lovers exchange.

Scents, close-up gazes, nocturnal lights, sounds and calls, and twisting, eyes upon eyes, pupils gazing at one another, arms opening, sudden crouches, steps reaching the door: an atlas of nocturnal postures between earth and dunes, beneath a shelter, in the primitive space of light.

Words in practice and nocturnal visits where things are not known, but sung. An ageless, listening heart pulsing next to vertebrae, not mechanically, but in pursuit of wonder and grace. Flesh of my flesh, with what touch? What beauty? A hand lets itself be guided by a whole body. A trembling, ancient hand, young and old, frail and solitary. A hand that become an eye, pupil of the hand.

Being dazzled, not just by light, but by the minimal resonance of reflections that come out of the darkness to collaborate in the birth of movements. In this interrupted-nocturne atmosphere, gestures rise from the abysses of the darkness. Around bodies, emptiness reigns, and only the measures of reflected light outline a perceptive map of approaches and adjacencies. The infinite that coalesces in the minimal space of two bodies appears inexhaustible.

The composition moves in rebounds, resonances, reprises and rifts, hemistichs that generate an infinite dance of details. Here nearness is interpreted as a sound that moves in cyclical hypotaxes, where the main line dissolves into myriad flowing nods and gazes, touches and scents.